The SignalPop products are designed to seamlessly work with the MyCaffe AI Platform. See us on GitHub for more information on MyCaffe!  To easily integrate MyCaffe into your products, just search for MyCaffe on Nuget!

After accepting these settings, re-run the SignalPop Universal Miner and mining will run and correctly mine Ethereum.

Are you looking for a way to design, build, train and debug your AI models on your local Windows computer and easily integrate those models into your C# based product? The SignalPop AI Designer is specifically designed to help you do just that!

The SignalPop AI Designer is an AI development environment that helps develop, build, train, test and debug your MyCaffe AI models locally on your own Windows-based development PC. Even with the low-cost NVIDIA 1050ti GPU (under $200), you can start deep learning with GoogleNet or AlexNet on your local computer or laptop – without cloud charges!

Given that the SignalPop AI Designer is based on the scalable MyCaffe AI Platform, speeding up your model training is easy – just buy a faster GPU like the NVIDIA RTX 2080ti or NVIDIA Titan Xp!

All that you need to start deep learning is a Windows 7 or 10 based PC with a NVIDIA GPU, Microsoft SQL Express (which is free), and the SignalPop AI Designer!

Once you have the SignalPop AI Designer installed and running, here are some of the cool things that you can do:

Easily create and manage datasets via the Dataset Creators.

Visual editing of your model via drag-n-drop operations.

Visual blob debugging to view the data and diff contents of each blob flowing between layers.

Visual layer debugging to view how a given layer behaves.

Real-time debugging which allows you to view the data flowing through your network as you train.

Visual debugging via deconvolution and un-pooling. 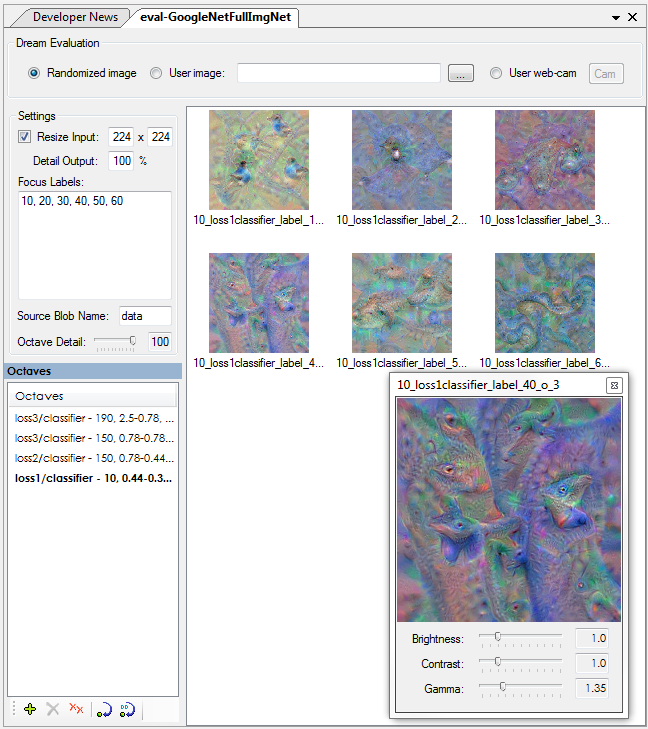 Neural Style Transfer (limited functionality) allows you to learn a style from one photograph and apply it to another ‘content‘ photograph to produce a new art piece.

NOTE: Enhanced features are only available to SignalPop partners at this time.

The General and Enhanced product editions have unlimited training time, including multi-gpu based training on headless GPU’s using NCCL 1.

SignalPop AI Designer Specific Requirements
System Memory (PC side): at least 8 GB
GPU Model: NVIDIA 1050TI or above with CUDA 10.1 (NVIDIA 750TI or above with CUDA 10.2).  CUDA support required with NVIDIA driver version 441.28 or later.
GPU Compute: by default, compute 5.3 and above (Maxwell) are used when using CUDA 10.2 (compute 3.5 is also provided, but is not the default).
GPU Memory: 2 GB (4 GB or more recommended)
Multi-GPU Training: requires at least two headless TCC capable GPU’s.
Database: Microsoft SQL or SQL Express 2008 R2 or above (Microsoft SQL or SQL Express 2016 and above is recommended on Windows 10) running in Windows Authentication Mode.